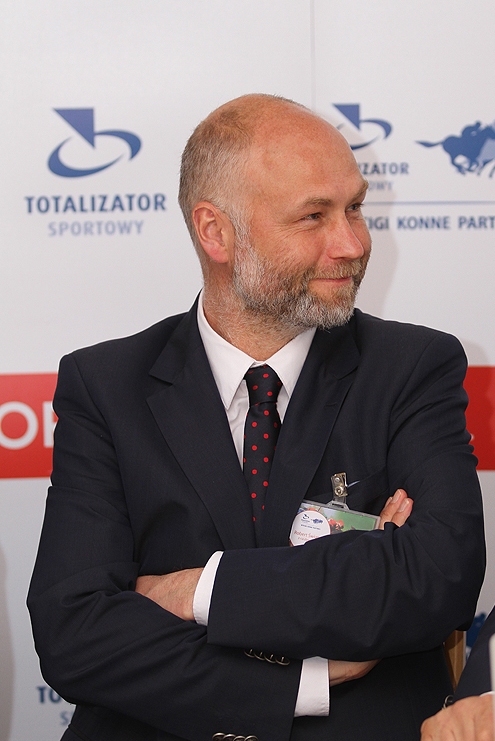 My adventure with race horse training begun in 1996. After number of
starts in the steeplechase races and one year internship in Italy,
I took over a racing stable in Wroclaw’s Partynice, one of the most
picturesque race tracks in Europe.  I was the youngest ever trainer in
Poland.

I’ve had a pleasure of working with many courageous horses.
Undoubtedly, the absolute legend of the Wroclaw’s track, Galerius, who
won 30 races in its illustrious career, will be forever ingrained in my
memory.  This extraordinary stallion also raced on difficult tracks in
Czech Republic, placing and earning well.

I’ve won three Derby & Oaks races with half-bloods and many flat, jump
and steeplechase races with Thoroughbreds, not only in Wroclaw, but in
Warsaw’s Sluzewiec and Czech’s Pardubice, Germany racecourses as well.

I represened Wroclaw’s Partynice racecource on the board of Polish
Jockey Club.  I was also a member of the Racing Law commitee.

I’ve been coaching jockey, trainer and steward candidates for
many years, as well as lecturing on race tactics, training principles and racing
laws.  I promote horse racing knowledge during the lectures at the
Wroclaw’s higher education facilities, colleges and universities.

I gladly engage in the veterinary research projects, e.g., regarding
use of thermography in diagnosis and treatment of tendon and soft
tissue injuries, influence of electromagnetic waves on regeneration
and recovery speed, especially in cases of horses participating in the
jump races.

I deeply believe that each horse deserves a chance to fulfill its
racing potential, and trainer’s role is limited to patient and skillful
uncovering of horse’s natural talent.  As such, I’m determined to
constantly expand my knowledge in horse psychology.

It’s my honor to preside over the Lower Silesian
Horse Racing Club of Partynice, an  organization built from ground up
in 2013 by Jarek Zalewski,  Adam Suchorzewski, Jerzy Sawka and me.  The Club was
successful in implementing first ever, fully professional horse racing
season on the Partynice track, one based on the international rules of
Thoroughbred racing.  Moreover, we’ve successfully brought back Wielka
Wroclawska, the most prestigious steeplechase race in Poland.

As a deputy director of the Wroclaw’s Racecource- Partynice, I
was responsible for development of relationships leading to the
track’s emergance on the interational arena.

In 2015 I participated in establishing of the fundamentals of the
jockey’s career program, which would allow direct education in such
career in the near future.

I received multiple awards for my contribution to the growth of horse
racing in Poland, e.g., „Promotor of Thoroughbreads and Racing” from
Jockey Development Foundation or „Activist of the Year” by sports
paper.
I participate on regular basis in the grandest horse racing events in
the World, e.g., Dubai World Cup , L’Arc de Triomphe, Epsom Derby ,
Velka Pardubicka.